So today I treated myself to a lovely meal at the Hotel Casino Restaurant in Talca. I was frustrated about not having gas to wash or cook today and all of my housemates seemed to have left for the 4 day holiday weekend.

What happened to the gas?

At first, I was upset this morning not having any hot water to shower, nor heat to cook or wash dishes.  I wasn’t sure how the gas functioned in the house and wasn’t about to experiment finding out (if you know what I mean).  I’m trying to keep everything here the way I found it. 🙂

After my emotions calmed I began to reflect upon all the things I take for granted by living in the United States, and as an American.  I also started to remember a period when as a child growing up, there were times when either a thunderstorm would take out the electric power in our neighborhood, or we would have to wait until Daddy got paid on Friday in order to turn the gas back on.  I thought about how I wasn’t all that upset back then, having to temporarily live  without what I knew as my amenities and “necessities”.  So, I next begin to pondered… Why was I not upset as a child?  Had I learned to arrogantly take for granted all of the conveniences and blessings I had by growing up in the US?

I now realize that as a child life is simply and you really don’t worry about these kind of things especially when your mom makes innovative ways for you to cope.  Plus, having 6 kids, allowed my parents to seemingly always  find ways to pass the time under such circumstances.  We would either boil some water to bath or light candles or use flashlights to see at night.  But,  has my advanced education and economic elevation into the “upper-middle class” change me?

So instead of being the “Ugly American”, brooding and pouting about how I miss ice cubes in my drink, not being unable to have a Superstore in proximity (walking distance) to me where I can buy something simple like an umbrella, or not being able to call the gas company to let them know I expect the problem resolved in 24 hours, I simply just chilled-out and walked to the mall and had a lovely meal.  Heck!!  I do still have electricity; so I could easily boil some water for my needs and also microwave any food I have to warm it up.  In short, there’s no real crisis Lisa, keep it movin’!

In closing, what I learned today was don’t be so quick to think “you’re all that” and expect things to operate the way you’re used to back in the U.S.  I emailed my mentor and committee Chair Dr. Bliss (who arrives back to Chile soon) about my problem and she does as she always does and encourages me to relax and have a good meal at the mall.  She said the same thing has happened to her in Chile while house for friends and it’ll be alright.  So the meal pictured here was delicious, this experience caused me to reflect on my own blessings and development  of appreciation for how people in different countries handle inconveniences not necessarily turning small things into big problems.  Most importantly, I get to close out my October blogging with some positive feelings and lovely images I recently captured from around my neighborhood in Talca, Maule, Chile. 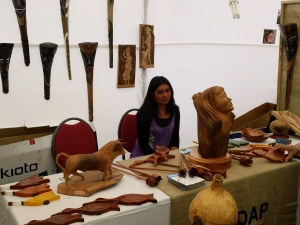 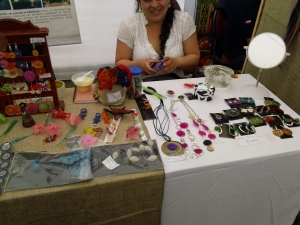 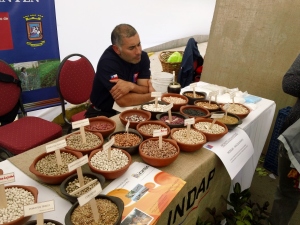 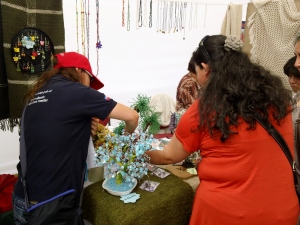 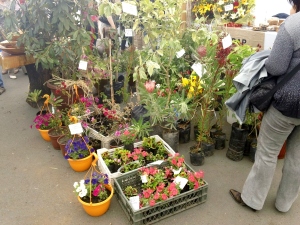 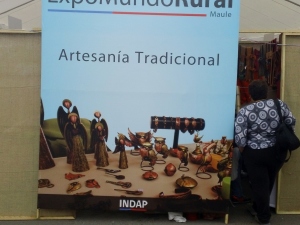 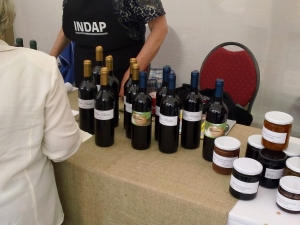 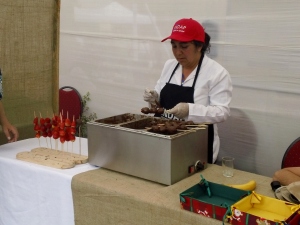 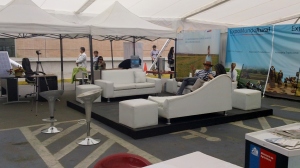 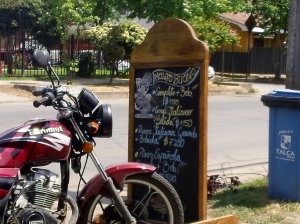 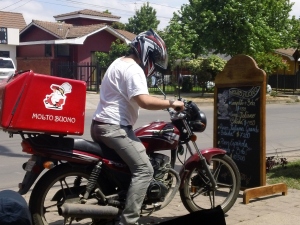 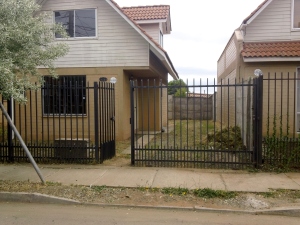 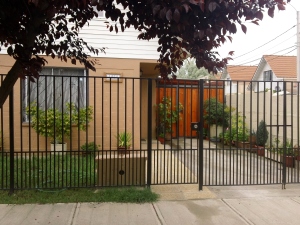 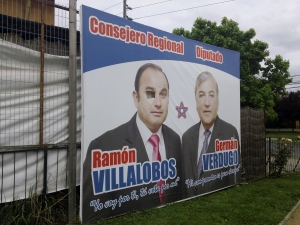 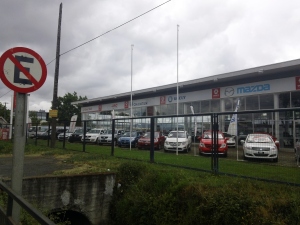 So the following pictures represent my last few days of sightseeing in Santiago that followed meetings at both UNIACC and the Minister of Education offices.

I had no idea how I was going to meet someone at UNIACC (my other research site) as I didn’t know anyone in Chile.  I had come to know a good amount of people in Talca and at UCMaule but no one could offer me a contact at UNIACC.  UGA Professors Luis Correa-Díaz who is a native of Santiago tried to help but I wasn’t getting anywhere by networking .

So I decided to just pick up the phone and call there!!  I was made initial contact with their Adult Education programs and was subsequently directed to Rita Gálvez in Admissions. She made immediate arrangements for me to come to campus that day which was a real blessing as it was my last day in Santiago.  I meet Attorney Carmen Luz Parra (above) when I arrived to campus and had a grand experience discussing my research and learning about UNIACC and its surrounding community.

The offer a completely online doctoral degree in Communications.  In the above picture you can see that they have their own campus media production studio on-site.

There was a lovely jazz club in Providencia owned by Alvaro Gomez Vega called The Jazz Corner.  It was a very relaxed place with beautiful wood decor and an upstairs loft.  Qué bueno!

Above is one of my many wonderful Chofers during my time in Santiago.  Señor Hugo Cayuleo and Juan Salazar (not picture) took great care of me while in Santiago.  I got everywhere I needed to go in good time and more importantly at a good price! 🙂  One of my local Chofers in Talca,   Benito, picked me up from the Talca bus station and informed me that I was a “Queen”, Reina and planted the customary Chilean cheek kiss as he returned me to my place in Talca.  Chileans men are such Caballeros (gentlemen). 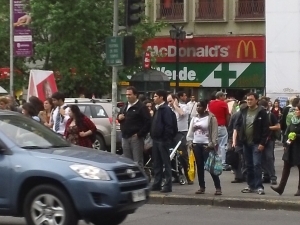 I was happy to see another Black person in Chile (or I just assumed she was Black), she could have been from the US, France, or the West Indies.  That’s what’s so amazing about the Black cultural experiences, it’s so rich and diverse and you can find Black people virtually all over the globe and man speak languages other than English.  Yeah, sometimes it can be a culture shock. 🙂

There always seems to be an exercise of some sort of civic engagement in Chile.  Here the protesters were asking the government to protect water rights at a local lake.

I did not pack sunglasses before coming to Chile as I expected I’d buy some new ones upon my arrival.  Unfortunately, the small shopping mall near my place has limited items and I would need to go into downtown Talca to find some lens.  To my pleasant surprise there was a street vendor selling these babies for about $4 bucks and I purchased them most immediately!!

Here is the flyer relating to the previously mentioned protest activities above.

I took this picture of what appeared to be some urban planning structured designed to encourage civic life in Santiago. 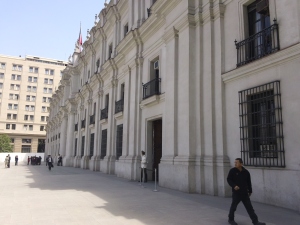 Picture of La Moneda (what would be the Chilean version of the US Whitehouse) which is  resident of the Chilean President.  There is an election on Sunday, November 10th for a new president and chances are strong that it will be a woman who has served as Chile’s president during a former term.  Candidates can run for the presidency more than one but cannot do so in consecutive terms as we hold in the United States.  Moreover, how cool is that to have elections on a Sunday to ensure full voter turnout (people usually don’t work on Sunday here). 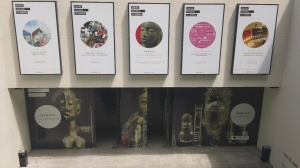 The Museum near La Moneda that I did not have time to visit but, is certainly on my agenda upon my return to Santiago next semester.

Visiting with my Chilean friend Loreta in her office.  She works for the Ministerio de Educacíon in Santiago and we had a great time discussing Adult Education and my dissertation research agenda in Chile. 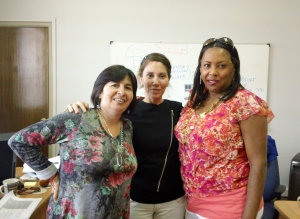 I didn’t learn how to operate the hotel elevator until my last day there.  The does kept closing but I wouldn’t move.  I later realized I had to select and then confirm my selection before the elevator would move.  It was so funny seeing people (and myself) watch the door opening and closing to the same floor.

I was relieved to see that I was not the only one who couldn’t effectively operate the elevators.  So take that stupid foreigner stereotype! lol

The Chilean Chronicles Blog (The US Return Extended Version)
Blog at WordPress.com.